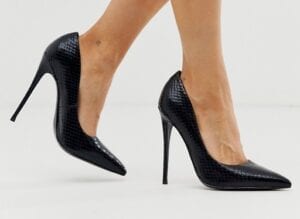 Enter the word “stiletto” into a search engine and then select “images.” Roughly 95% of the images the screen will depict a well-turned ankle along with shoes featuring long thin heels.   A few of the images will depict a long – 10 to 15 inch – metal shaft, tapering gradually to a point hafted to a straight handle with a cross guard.

The weapon which came to be known as the stiletto was developed in the pre-firearm era when protective body armor was common.  The weapon typically featured a long shaft with a square or triangular cross section.  The name was derived from the Latin word “stylus” which was a pointed instrument for marking clay tablets.  The stiletto weapon was designed to penetrate through chain mail armor or to slip through the interstices of steel plate armor.  It was a thrusting weapon rather than a cutting or slashing weapon and lacked effective cutting edges.  (See AKTI Definitions).

A majority in today’s world think of women’s high fashion shoe when they hear the word stiletto.  If the context suggests knife, they understand a stiletto as the type of knife Roman Polanski uses to cut Jack Nicholson’s nose in the 1974 film Chinatown.

Fourteen U.S. states and the District of Columbia impose restrictions on the possession or carrying of a stiletto.  None of the statutes provide a definition for stiletto.  Accordingly, stiletto restrictions are neither isolated nor understood.

Laws must be understandable and not conducive to arbitrary application.  Our system of justice relies on impartial jurors, tapped from the general population, to receive evidence and then discuss, deliberate, and decide issues of fact.  How do we fairly apply a restriction for carrying a stiletto (which may involve a substantial deprivation of liberty) when most of us think stiletto refers to footwear?

Michigan is among the states in the U.S. that imposes restrictions on stilettos.  MCL 750.227 provides that it is a felony punishable by imprisonment for not more than five years to simply carry certain items concealed:

A person shall not carry a dagger, dirk, stiletto, a double-edged non-folding stabbing instrument of any length, or any other dangerous weapon, except a hunting knife adapted and carried as such, concealed on or about his or her person, or whether concealed or otherwise in any vehicle operated or occupied by the person, except in his or her dwelling house, place of business or on other land possessed by the person.

A 2015 case from Michigan captioned People v Laich is an example of ignorance on the part of law enforcement and prosecuting officials as to an item which was plausibly a stiletto.  Defendant Laich was detained by police in a shopping mall after another customer complained that he was carrying a rifle.  While no firearm was found, an item described as a spike was found in a sheath which was concealed.  He was charged violating MCL 750.227.  The prosecution asserted that the item was a dagger or dirk.  There was evidently no question as to whether it could be a stiletto.

The total item length was about 8 inches.  It featured a textured handle and “three 3– to 3 ½-inch straight edges terminating in a sharp point.”  In other words, the non-handle portion had a triangular cross section which gradually tapered to a point.  The three edges were not sharp.  During the initial hearing defense counsel demonstrated as much by applying “pressure with all three edges to the courtroom podium, a legal pad, and his own hand to no effect.”  The trial court judge dismissed the charges.

Thus, a knife is a cutting instrument that consists of a sharp cutting part (a blade) and a handle.  By deduction, then, both a dagger and a dirk must also be cutting instruments with handles and sharp blades.

The Court reasoned that since the item had no sharp edges it could not be a dirk or dagger, it could be an “other dangerous weapon,” a catch-all category, within the restrictions imposed by MCL 750.227.

A New York court similarly resorted to the catch-all in People v Thomas 337 N.Y.S.2d 850 (1972) where the victim of an attempted robbery (approached from behind) was able to briefly observe a weapon and the face of the assailant who seized her purse and fled.  He evidently discarded the weapon before being arrested.   The defendant was charged with robbery in the first degree in that he was armed with a “stiletto type knife.”  He argued that without proof as to the details of the blade and other characteristics it could not be established that the item was a “dangerous weapon.”  The court observed:

Dagger is a generic term covering dirk, stiletto, poniard, etc.  The evidence presented to the Grand Jury indicated that the victim was threatened with a “stiletto-type knife.”  This is sufficient to come within the meaning of the term “dangerous weapon” as defined in the Penal Law.

Appellate level decisions involving what is claimed to be a stiletto are quite rare.  In the New Jersey case of State v Lee 475 A2d 31 (1984), the weapon in question was a pair of scissors with the handles taped together.  To the extent that a name for the weapon was deemed necessary it became a stiletto:

At the trial Sgt. Michael O’Donovan was qualified as an expert on weapons and gave his opinion that the taped scissors were useless for their traditional purpose and in the taped condition became a “stiletto.”

This is not intended to suggest that the courts in the three cases mentioned above were mistaken.  Each case involved a dangerous weapon.  Sergeant O’Donovan’s observation that scissors – especially the very narrow pointed type typically used for tonsorial purposes – would share some characteristics with a “stiletto” is apt.  The outcome of the case should not be dependent on the noun attached to the weapon.  A “dangerous weapon” catch-all is similarly too indefinite.

The America Knife & Tool Institute (AKTI) has consistently urged that name or subjective based restrictions such as “bowie” or “dirk” are too imprecise.  Where restrictions are necessary and will serve a valid purpose, they should be objective.  The knife community must be heard on this subject.

It is appropriate to mention the New York case of People v Erica Moreland 103 A.D.3d 1275 (1983) where the defendant was convicted of violating § 120.05 Assault in the second degree.  The “dangerous weapon” was a “stiletto boot” with which she kicked and injured the victim.  AKTI takes no position on fashion footwear or the nomenclature thereof.

The American Knife & Tool Institute is working to eliminate frivolous restrictions and ambiguity in knife laws at both the federal and state levels. Stay informed and Carry with Confidence.  Sign up for monthly email news to Stay Informed about AKTI’s legislative initiatives and other valuable information about the knife community.

Remember SASS when teach knife safety Stop – Make sure no one else is within arm’s reachAway – Always cut away from your finger or other body partsSharp – A sharp, clean knife is a safe knifeStore – Knives closed, in a sheath or knife block ... See MoreSee Less