This article appeared in Knife Magazine in March 2020. 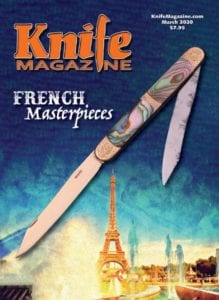 A category of legal knife restrictions exists, which can generally be labeled “brandishing.” This category can be viewed as the direct opposite of the restriction for concealed carry. In the case of knife concealed carry, the offense occurs when an individual carries a specific illegal knife in a pocket or under a layer of clothing so that it is not discernible by others. The offense of “brandishing” typically involves the manner of open carry or display. The offense does not involve making a threat but rather exhibiting a “threatening manner” while in possession of a visible weapon.

While “brandishing” laws have been in place for decades, there are several factors that suggest that those in the knife community should exercise some increased level of caution and circumspection in today”s hyper-aware world. Brandishing involves a psychogenic reaction in the mind of an observer. Our society has become overly sensitive as to the threshold of what arises as a threatening display or warrants alarm for personal safety.

An example is the second-grade student, aged 7, nibbling a pastry while at school in 2013, who exclaimed that he “made a gun” and displayed the snack to his classmates. While there was never the slightest indication that either his contemporaries or the teaching staff perceived some threat from a partially- consumed pastry “Pop Tart,” the boy was suspended from school. His parents sought relief from the courts, where the suspension was upheld by a judge in Anne Arundel County, Maryland!

In past decades, children were taught to differentiate between actual and illusory threats with the familiar rhyme “sticks and stones can break my bones, but words will never hurt me.”  Nowadays, the phenomenon of being “triggered” by a few benign words is celebrated.  Universities, which were long ago established to develop students” ability to reason and function in a competitive world, now coddle students in “safe spaces” and promote delicate sensibilities with “speech codes.”

Brandishing laws were enacted at a time when the individual psyche was – for lack of a better term – “tougher.”  Behaviors, mannerisms, and discourse, which were once common and benign, are now cause for alarm.

Yet another recent legal development is the “extreme risk protection” or “red flag” legislation in many states. The stated purpose of such laws is the early detection of those who will commit mass shootings, which is a laudable goal.  However, a conviction or intervention for “brandishing” any deadly weapon can become the germ of an extreme risk protection action (See Oregon. § 166.527 (e). Over-reaction happens, as suggested by the harmless “Pop Tart” pistol mentioned above.

Brandishing laws exist in “open” as well as “concealed” carry states. In Maine, the concealment and conspicuity offenses are part of the same statute, § 2001-A. captioned “Threatening display of or carrying concealed weapon.” It provides that one may neither “display in a threatening manner” nor “carry” concealed a bowie knife, a stiletto, a dirk, or any other “dangerous or deadly weapon.”

In the State of Washington, it is unlawful to, among other things, “display” any knife under circumstances that warrant “alarm for the safety of other persons.” (See 9.41.270 captioned “Weapons apparently capable of producing bodily harm.)

California law provides that it is unlawful to draw or exhibit any deadly weapon in a “rude, angry, or threatening manner” when in the presence of any other person. The offense occurs even when the other person is not aware of the weapon. (People v. McKinzie, 224 Cal. Rptr 891, 1986).  In Nevada, the wording of the brandishing law contains the same “rude, angry, or threatening manner” language but requires that the drawing or exhibition be in the presence of “two or more persons.” (N.R.S. 202.320). Nevada law wisely prohibits school students K-8 from being punished for “brandishing a partially consumed pastry or other food item to simulate a firearm or dangerous weapon.” (N.R.S. 392.4634).

Certain state laws establish measurable standards. With respect to knives, Virginia has set the bar at “machete or any weapon with an exposed blade 12 inches or longer.” (VA Code § 18.2-282.1).

A “brandishing” law is not present in all states. “Disorderly conduct,” a broad-in-scope offense that often uses language such as “causing public inconvenience, annoyance or alarm” but does not contain a weapon requirement, is an alternative. Municipal ordinances frequently contain some brandishing restrictions, as well.

For some examples of brandishing, an obvious source is the motion picture industry, most particularly the “action” genre. Almost everything we see in a movie is intended to have some “effect.” The problem knife brandishing laws are intended to curb is the possession or display of a knife having some alarming or threatening effect.

If one wants to avoid a brandishing charge, a person should not open or draw a knife, as seen in the movies; a simple rule of thumb. Drama is a common element of action movies and brandishing.  When some routine task is presented, that requires a knife and persons unknown are in the immediate vicinity, one should be circumspect and polite. Use both hands to expose the blade if it is not awkward to do so, especially if you are using a “butterfly” knife.  A person should avoid flourishing or quick movements, but not to the degree that their manner becomes furtive.

Those of us in the knife community must remember that not everyone shares our appreciation for man’s oldest tool. We all benefit from a positive public image and from not giving cause for alarm.

The American Knife & Tool Institute (AKTI) is working to eliminate frivolous restrictions and ambiguity in knife laws at both the federal and state levels. Stay informed and avoid being complacent, especially when traveling across state lines. Guidance on state laws is available on the AKTI website at State Knife Laws.

Sign up for monthly email news to Stay Informed about AKTI’s initiatives to remove or clarify knife laws at www.AKTI.org.