Summary: Some cities, municipalities, counties, and other local governments have enacted their own law banning the sale, possession, manufacture, or carry of certain types of knives. Some of these laws have been in place for several years, and perhaps not enforced, and might include archaic terms (Refer to AKTI’s Approved Definitions), blade length, or other prohibitions that are more significant restrictions than the majority of the rest of the state.

It is the American Knife & Tool Institute’s position that knife owners should not be expected to know and understand knife laws in multiple local jurisdictions where they may travel within their home state for work or recreation with their knife or edged tools.  It is not unreasonable to expect individuals to research a patchwork of laws when carrying a valuable tool during everyday travel.

Preemption (statewide application and uniformity): Enacting knife preemption laws makes the state the sole authority on knife laws. No local government or political entity may enact any law more restrictive than the state law.  The statewide uniformity of laws is not a new concept or initiative.  It has been used in other circumstances, such as firearms, ammunition, etc., to protect individuals from a myriad of laws.

Legislation: The majority of states have firearms preemption laws enacted due to the National Rifle Association’s campaign to ensure consistency of laws for gun owners. We suggest that legislators include knives into these preemption laws, where appropriate. Legislators are encouraged to contact the American Knife & Tool Institute for assistance with wording or advice on knife legislation. 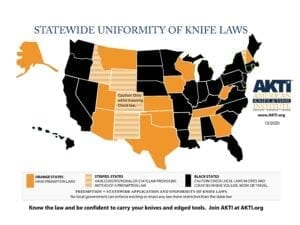 In these states, knife preemption is not necessary due to the nature of their state law or constitution or there is other protection:

The countdown for AKTI's Free to Carry Fundraising Event is on! Check out all the unique custom and collectible items available for bid on August 19th by going to www.fundraiser.support/freetocarry . ... See MoreSee Less