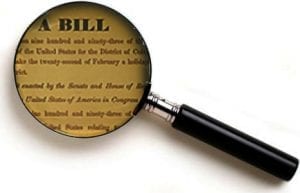 Procedures vary state by state but follow the same basic format as the federal government for introducing legislation.  You can learn how it all works in your state by following the link to your state’s legislative explanation of their process here.  Links to state legislature home pages, bill lookup pages, and member lists for each chamber and be found on StateScape Legislature Links.

Ideas for bills or drafting of wording can come from anyone, but only a Member of Congress (who becomes the “sponsor”) can introduce legislation. There are two basic types of legislation: bills and resolutions.

The official legislative process begins when a bill or resolution has been assigned a number. Senate bills are designated by beginning with an S. House-introduced legislation begins with H.R. (Only the House can originate bills appropriating money.)

After legislation is introduced, it is referred to the committee that has jurisdiction over the subject. A bill may be sent to a single committee, several committees at once, from one committee to another, or split up and different parts sent to different committees.

Procedural rules determine how bills are referred to the various standing committees of the House or Senate. Each bill referred is placed on the committee’s calendar. It can be considered by the entire committee or referred to a subcommittee for review. This phase of the process is very important as bills are examined by the committee to determine how likely it is to be passed. If a committee does not act on a bill, it has the same effect as killing the bill.

Bills are referred by the committee to a subcommittee that has a narrower focus to allow further study.

If the subcommittee reports out legislation, the full committee will go through the same process of hearings, markup, and reporting out. If the committee approves a bill, it is reported out to the full Senate or House.

The committee chairman requests the staff to write a report on the bill describing the intent and scope of the legislation, the executive branch’s position, any impact on current laws and/or programs, and the opinions of any committee members who voted against “ordering a bill reported.”

After the committee reports the bill back to the appropriate chamber (House or Senate), the legislation is placed on the calendar in chronological order for debate.

Action by the President

Once a bill has been approved by both chambers, it is sent to the President, and he may:

Congress can override a veto by the President by a two-thirds vote in both chambers.