This article appeared in Knife Magazine in the September 2022 issue. 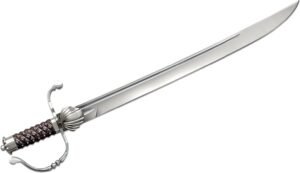 The American Knife & Tool Institute (AKTI) receives several inquiries per year regarding swords. Generally, the query is from someone seeking information about the legality of carrying a sword or about the applicability of knife laws to a sword.

A bright-line distinction between sword and knife is not easily defined. Sword blades are obviously longer than knives, but no clear limitation exists. Edged instruments incorporate design features that often favor a particular use. Generally, knives are intended to be used for cutting and slicing; swords are designed for striking and a more forceful application of the blade edge. A very sharp edge is desirable on a knife. The blade of a sword will likely feature a wider cross-section, the blade will be less sharp, and the tip design less susceptible to breaking.

Few states have statutory laws regarding or restricting “conventional swords.” Several states impose legal restrictions on “sword canes,” which outwardly appear to be a walking stick or cane.1  This is probably attributable to the fact that conventional swords are obvious.

A South Carolina statute – originally enacted in 1812 but still in effect today – restricts conduct rather than carry with respect to swords. It provides that it is unlawful to convey or accept a challenge to fight another individual with a sword:

It is unlawful for a person to challenge another to fight with a sword, pistol, rapier, or any other deadly weapon or to accept a challenge.

A person who violates the provisions of this section is guilty of a misdemeanor and, upon conviction, must be imprisoned for not more than two years. A person convicted under this section is deprived of the right of suffrage and is disabled from holding any office of honor or trust in this State.

The most recent case involving § 16-3-410 – Sending or accepting challenge to fight – was Cunningham v State, decided in 1843. Carrying a sword in South Carolina – absent criminal intent or entry onto school grounds – is not unlawful

Sword possession or carry cases are not unheard of in current times. The case of Commonwealth of Pennsylvania v. Giordano 121 A.3d 998, decided in 2015, involved one William Giordano, who stated while on trial:

It looked pretty neat to walk around with a sword. Like, everybody carries guns, and I don’t like guns, so I carry a sword instead.

Mr. Giordano and his wife proceeded to the local school district administrative offices on September 17, 2014, to address concerns that their child had been sent home for failure to abide by the dress code. Giordano reportedly “became angry” and complained that his child was being deprived of an education. The school district representatives meeting with the parents stated they felt “threatened” by the fact that Giordano was wearing a sword and had his hand on the hilt. The district superintendent was summoned and attempted to restore calm by providing the family with sample uniforms for their children. Giordano was also informed that he should not bring the sword to the district offices as the same was considered school grounds, and weapons were prohibited.

The following day, Giordano returned to the administrative offices again, wearing the sword. He was reportedly angry, yelling, and requesting a sweater for his child. A police officer was summoned. Giordano was taken into custody and charged with two counts of disorderly conduct and possessing a weapon on school property.   A jury found him not guilty of disorderly conduct but guilty of the possession charges. He was sentenced to five years of restrictive intermediate punishment to be followed by probation for two years.

The case of Zaitzeff v City of Seattle 484 P.3d 470 (2021) is a more recent possession case (and possible dress code issue). The decision by the Washington Court of Appeals succinctly describes the events which gave rise to the case:

In May 2018, Zaitzeff walked around Green Lake Park with a sheathed sword hanging from his neck. A citizen called 911. The caller said Zaitzeff was wearing a thong, approaching women, and taking photos of them. When police officers arrived, they confirmed he had a sword, which measured about 24 inches long. Zaitzeff acknowledged he was aware of the ordinance against fixed-blade knives and that he was not hunting, fishing, or going to or from a job requiring a sword. The officers took the sword and cited him.

Zaitzeff was found guilty of violating Seattle ordinance 12A.14.080 Unlawful use of weapons, which provides it is unlawful to:

Zaitzeff was aware of the Seattle prohibition on fixed blade knives before the May 2018 events in Green Lake Park, as he had filed a lawsuit against the City of Seattle in a Washington state court in January of 2016, challenging the constitutionality of the Seattle ordinance. That case was removed to the U.S District Court and later dismissed without prejudice for lack of standing. He filed a second lawsuit regarding the same issues, which the court dismissed with prejudice in February 2018.

Although we do not know, it may be that Zaitzeff’s reason for carrying a sword in Green Lake Park was part of his effort to challenge the Seattle “dangerous knife” ordinance, which prohibited the carry of any fixed blade knife as his defense focused on the constitutionality issue. Zaitzeff sought a review of the Court of Appeals decision affirming a conviction by the Washington Supreme Court and then the U.S. Supreme Court – both of which declined the matter.

If a challenge to the ordinance was his intent, the choice of a sword allowed the Washington Court of Appeals to recast an ordinance restricting any fixed-blade knife as a sword-specific ordinance:

Likewise, an ordinance prohibiting the carrying of 24-inch swords in a public park in Seattle is reasonably necessary to protect public safety and welfare and is substantially related to the goal of preventing sword-related injuries and violence.

The ordinance prohibits the carry – openly or concealed – of any fixed-blade knife and any other knife with a blade length exceeding three and ½ inches. If the ordinance’s goal was to prevent “sword-related injuries and violence,” it is grossly overbroad.

It may be that had Zaitzeff carried a modest sheath knife and avoided taking photos of unwilling subjects, a 911 call would not have occurred.

For those who wonder, carrying a sword in many states is lawful. Laws that apply to knives will almost certainly be applied, as seen in the Zaitzeff case. Accordingly, a double-edged broadsword in Michigan would be classified as a double-edged, non-folding stabbing instrument, and having such an instrument in one’s vehicle would be a felony.

For those who choose to carry a sword, AKTI suggests the exercise of judgment to avoid creating a negative perception of the knife community.  AKTI is dedicated to keeping knives in American lives.    Reliable, regularly updated knife laws can be found on the AKTI website www.stateknifelaws.com as well as other valuable information for the knife user or knife business.