The basic design objective of a folding knife is something that will tend to remain closed unless the user desires or intends to expose the blade and that the blade will remain open until the user desires to fold or close the knife. Another design objective is that the knife will be convenient to employ, meaning that it can be opened easily. Many of the tasks for which a folding knife is employed involve holding some material or holding something in place or steady while the cut is made.

In the typical folding knife, the blade swings or pivots in an arc of approximately 180° from the closed position (within the handle) to the open position. Without some means of providing a bias or lock to the closed position, the knife could swivel open, or at least partially open, unexpectedly or unintended. 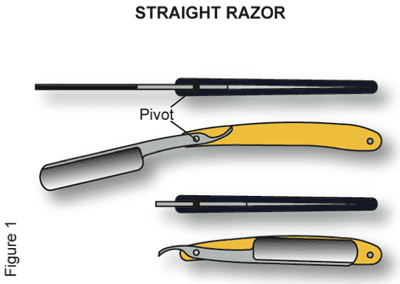 An old-fashioned “Straight Razor” is another example of a folding knife-like device with no bias or other such mechanism to hold it in either the closed, or for that matter, the open position. (See Figure 1) Most people would be very hesitant to carry a straight razor in a pocket unless it was also enclosed within a case or sleeve.

A common design for providing a spring-loaded bias to both the closed and fully open position utilizes a bar spring, which applies pressure, or a spring load, against the base of the blade near the pivot point. This design is referred to as the “Slip Joint Knife.” (See Figure 2) The direction of the spring load is from the outer edge of the blade toward the center of the pivot hole. When the blade is in the fully open position, the force or load of the spring tends to keep the blade in that fully opened position. Folding or closing the knife requires a certain amount of exertion to overcome that bias and pivot the blade into the handle. 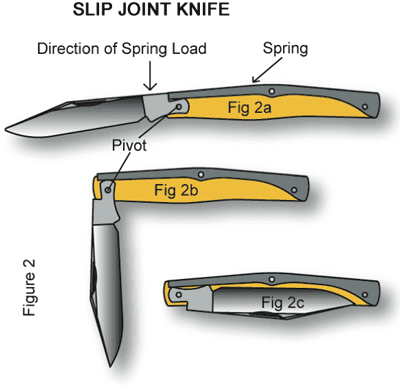 When the blade is in the fully closed position (Figure 2C), the pressure of the back spring similarly tends to hold the blade closed within the handle of the knife.

In some respects, the bias on the blade is similar to the bias on a typical bicycle kickstand. The leg or strut that supports the bicycle is held in the up or retracted position by spring action. As one starts to lower the kickstand, typically by foot pressure, the bias toward the up position is overcome. As the leg or strut approaches the vertical, there is often a bias which tends to hold it in the down position. Some designs use an over-center. Others use variations on the detent design.

Opening the blade of a slip joint knife requires a force to overcome the camming action created by the eccentric tang or base end of the blade. For the first 45° (approximately) of pivot, there is a bias toward the closed position imposed by the spring load. After this 45-degree rotation, the spring load becomes neutral, and there is only friction resistance until the blade is pivoted in an arc of approximately 135°. At that point, the bias toward the fully open position is often capable of moving the blade to the fully open position.

The slip joint design has been in use for well over a century and has the advantage of providing both bias toward closure and bias toward the fully open position. In short, it is a time-tested, simple design that is reasonably effective in keeping the blade in either the fully open or fully closed position. 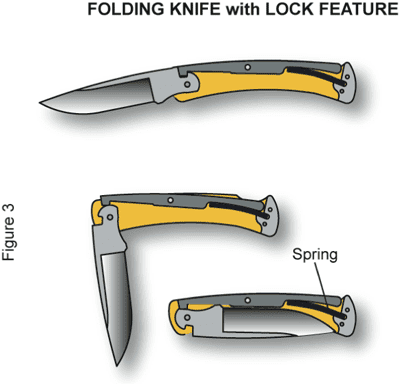 (Figure 3) shows a type of knife frequently referred to as the lock back. This design utilizes the same type of bar spring to provide the bias toward opening, as well as the bias toward closure. In that respect, it is similar to the slip joint design. It does have a design feature intended to enhance user safety by providing a positive lock mechanism to the fully open position. The lock back design utilizes a notch or mortise at the base of the blade into which a tenon or projection of the back spring locks when the blade is pivoted to the fully open position. Closing of the knife requires the user to depress the spring and release the lock.

A spring-loaded liner that shifts laterally behind the fully opened blade has also been used to achieve a positive lock to the open position. This particular design was often seen on the common “electrician’s knife,” where it was used to lock the screwdriver tipped “blade” into the open position. Without such a lock, pushing on the handle while attempting to turn or drive a screw would allow the tool to fold.

In the 1970’s, a knifemaker and designer named Michael Walker, developed a design which eliminated the back spring and used a spring-loaded liner to provide both a bias toward closure and a positive lock when the blade was in the fully open position. This was done by adding a ball detent mechanism. When the blade is in the fully closed position, a detent or depression in the blade is engaged by a ball partially embedded or set in the liner. The lateral spring load of the liner pushing the ball into the detent provides a way of keeping the blade in the fully closed position.

A ball detent mechanism is commonly used with socket wrenches, where the spring-loaded ball is fitted to the drive fitting. It is used to keep a socket “locked” onto the drive mechanism. In order to change sockets, the user must overcome the ball detent lock mechanism by pulling the socket off of the drive post. 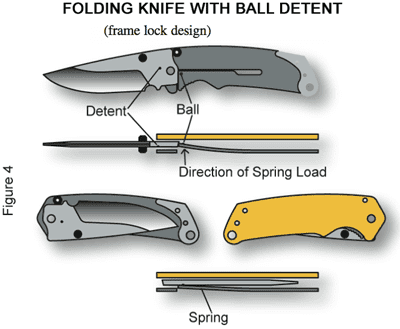 Opening the blade of a liner-lock design knife requires sufficient force to overcome the spring load pushing the ball into the detent. Typically, only a few degrees of rotation is necessary to overcome the bias. In this regard, the liner lock is usually easier to manipulate than the slip joint design.

Another significant development in the folding knife technology is attributed to knifemaker Chris Reeve, who developed a design which uses the handle or frame to take the place of the liner. Reeve has named it the integral lock. This design is sometimes also referred to as a frame lock. The ball detent mechanism is incorporated into part of the handle, which is spring loaded to shift the same manner as a liner lock. The ball detent mechanism is also much more easily observed in the integral lock design, although the principle of operation is the same as the liner lock. Figure 4 shows the Chris Reeve integral lock design.

There are other methods of achieving bias toward closure. There are other methods of creating a detent mechanism. For instance, most people are familiar with the detent feature on automobile doors. Typically a roller detent mechanism is used to create a detent that will hold the door in the open position. The Axis lock, a trademark of the Benchmade Knife Company, uses a variation of a roller detent design to create a bias toward closure.

The 2009 Amendment to the Federal Switchblade Act, 15 U.S. Section 1244(5) and the laws of several states, including California, Kansas and Texas, which incorporate the concept of bias toward closure, do not require or prescribe a particular mechanism. Rather all that is required is that the design provide some bias toward closure. Moreover, none of these laws specify a minimum measure of bias.

A special thanks to Daniel C. Lawson, Esquire, of Meyer, Darragh, Bucker, Bebenek & Eck, P.L.L.C, Pittsburgh, PA, for his authorship and revisions of the AKTI APPROVED KNIFE DEFINITIONS.

Drawings provided by Buck Knives and are the property of AKTI.