AKTI and the knife industry take on the problem of inferior products made and sold illegally.

Protecting the integrity of its products is essential in maintaining the good name of any company, and today the American Knife & Tool Institute and the knife industry finds itself on the front line in the fight against counterfeiting.

Essentially, counterfeiting relates to the production, manufacture, distribution, or sale of any products without permission of the entity that owns the intellectual property rights to those products. For knife manufacturing companies and custom knifemakers alike, the problem of counterfeiting has risen dramatically in the last decade. The American Knife and Tool Institute (AKTI) has assumed a leading role in addressing the problem of counterfeiting, taking a proactive stand against an issue that plagues the industry.

“The counterfeiting problem is huge in the knife business as well as a lot of other U.S. businesses,” explained AKTI Executive Director Jan Billeb. “According to the Secretary General of the International Chamber of Commerce, multinational brand owners lose approximately 10 percent of their annual top-line revenue to counterfeiters. Based on the latest ‘AKTI State of the Sporting Knife and Tool Industry Report,’ we conservatively estimate that the annual financial impact on the sporting knife and tool industry is around $80 million. In addition to the loss of sales revenue, companies and knifemakers incur other costs such as increased customer service issues, legal fees, monitoring counterfeiters, and erosion of their brands.”

In response to the growing concerns with knife counterfeiting, AKTI hosted a roundtable conference in Portland, Oregon, last February. Representatives of knife companies from across the United States attended the conference, which was organized to offer expert information on the topic, to share the efforts companies are making in the ongoing battle against counterfeiting, and to discuss the leading role that AKTI is playing in the process. 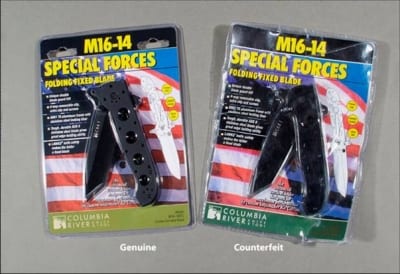 During the roundtable, presentations were given by domestic and international intellectual property attorneys, a specialist in protecting brand integrity on the internet and in social media, the maximization of property rights by U.S. Customs and Border Protection officials, and representatives of knife manufacturers that have been victimized by counterfeiters. AKTI is also planning a workshop on the issue to be held on Sunday, June 2, at the 2013 Blade Show in Atlanta.

Analyzing the counterfeiting problem reveals that several factors have influenced its growth and negative impact. Foreign governments, particularly that of China, tend to ignore the issue or in some cases may even support those who engage in the illegal activity. The internet has contributed to the ability of counterfeiters to market their “knockoff” products available to buyers around the world. Some consumers are unwittingly taken advantage of – duped into thinking they are buying an authentic product at a greatly reduced price – while others know what they are buying and choose to financially support the counterfeiters. The entire phenomenon appears driven by ill-gotten profits.

“I would suggest the roots lie in greed and lack of integrity,” commented Anne Reeve of Chris Reeve Knives, whose company has received numerous tips relating to counterfeiters posting bogus Reeve knives for sale on the internet and effectively had many of these items or sites taken down.

“People want to profit from the work of others,” Reeve continued. “It is the successful products that are being counterfeited – across the board, not just in the knife industry. I believe, although I have no evidence, there is assistance given by the Chinese government to these endeavors, whether it is active and financial or simply turning a blind eye. To a degree, there is a demand in the market. People are accustomed to paying low prices for goods, but they still want the good stuff. By purchasing the counterfeit goods, they support the problem.”

The counterfeiting problem surfaces readily in customer dissatisfaction. Counterfeiters not only duplicate the authentic knives with often inferior workmanship and materials, but also the paperwork and descriptive materials and packaging. When the inferior product fails during use, an unsuspecting customer is likely to send the knife to the manufacturer, expecting that the accompanying warranty will be honored.

“We’ve experienced counterfeits bearing our trade name and trademarks coming into our warranty department,” related Les de Asis of Benchmade Knife Company. “Some were attempts to copy our products. Others bore no resemblance to our genuine products but had our brand name stenciled on them. Bottom line – buyer beware! You deserve to get what you pay for. We pride ourselves in our ability to innovate, satisfy, and take care of our customers’ needs. We share the consumer’s pain when we tell them it’s not a genuine Benchmade.”

According to Rod Bremer of Columbia River Knife & Tool, his company has experienced counterfeiting from “direct knockoffs of most of our designs right down to the packaging and literature in the box.” The problem is compounded by product failure and consumer dissatisfaction.

“This is a huge issue for all concerned,” he acknowledged. “If an uneducated consumer buys a counterfeit unknowingly based on, say, simple word of mouth, and the product woefully underperforms, you’ve not only lost the chance for a longtime customer, but the likelihood of the duped consumer spreading the word is devastating.”

Bremer says that current indifference from foreign governments has generated enforcement action that amounts to “lip service but not nearly enough teeth, while demand for cheap goods regardless of the brand, along with the profit motive, and, sadly, consumers that like to buy counterfeits knowingly and somehow getting a thrill out of beating the system” continue to present the greatest challenges to eliminating the problem.

A unified effort by the knife industry and greater focus from the U.S. government are required to effectively stem the counterfeiting tide. In addition, increased monitoring of the internet can take the easiest marketing method for counterfeiters out of the picture. Consumer education will also raise the awareness of counterfeit products and reduce their level of consumption.

“I think it will be a long time before we will be able to say that counterfeiting has been stopped, if that day ever comes,” said Reeve, “but efforts to reduce and bring it under control are essential. It needs a change in culture, education of the buying public, vigilance by U.S. Customs, the imposition and/or increasing of import duties on Chinese products coming into the U.S., and some mechanism to penalize those who sell these counterfeit items.”

The battle has been joined, and that collective effort is gaining momentum. Billeb says that knife manufacturers can take several steps on their own to monitor and stop counterfeiters, particularly those with an internet presence. AKTI has developed guidelines that are helpful, and the beginning point for any manufacturer is to make sure that their intellectual property is registered properly in every necessary location.

Meanwhile, progress is surely being made. “After several companies participated in the AKTI roundtable last February, we are working together to develop strategies and tactics to effectively combat the growing trend in intellectual property theft,” noted de Asis. “By sharing information and internet search engine software, the number of unauthorized postings on domestic and foreign auction and selling sites is being reduced dramatically! In the instance of one member company, listings offering unauthorized products have dropped from thousands to less than a handful.”

In the fight against counterfeiting, a tremendous amount of work remains to be done, and AKTI is committed to success. “AKTI’s efforts to raise the awareness about the issue of counterfeit goods, to help companies and customers better understand the impact on them, and to develop strategies for actions that can be taken will only be successful if companies and knifemakers support us in that effort,” asserted Billeb. “We encourage anyone faced with counterfeit issues to attend our seminar at the Blade Show, learn short-term actions, and discuss long-term solutions. We need those affected by this problem to join AKTI now so that as an organization we can advocate on their behalf and for the entire knife community, everyone that buys, sells, or owns knives and edged tools.”

Counterfeiting can be controlled. For the future of the knife industry, action is being taken today.