For the American Knife and Tool Institute, attending the annual Blade Show in Atlanta is much like returning for the first day of school. We know we’re going to see old friends. We’re hopeful we’re going to make new friends. And we’re energized by the prospect that we’ll learn something fresh and innovative.

The 2022 Blade Show was held earlier this month. After two years of navigating COVID restrictions and subsequent policies, that “first-day-of-school” feeling was even more intense. Adding to the enthusiasm was AKTI’s  plans to host an “Industry Celebration” dinner on the first night of the show.

Looking back at Blade Show 2022, we can say with absolute certainty that   AKTI had an extremely successful show. Here’s why.

The AKTI Board of Regents held their annual meeting the day before the Blade Show began. During the meeting AKTI President Mark Schreiber of CRKT led a general discussion of the health and strength of the sporting knife industry.  The knife industry came through 2020 and 2021 in excellent shape as consumers increased their participation in outdoor activities and further embraced the preparedness mindset. Supply chain issues were a bit of a speed bump for most companies along the way, but knife companies grew stronger together in the last two years, putting the industry in excellent shape to prepare for the uncertain economic times of 2022.

The 2022 Blade Show was held about a month before automatic knives became legal for carry and use in Virginia (July 1). That legislation was deftly shepherded through the process by AKTI member Blue Ridge Knives of Marion, Virginia. Additionally, John Sullivan of W.R. Case Knives is leading an effort to remove automatic knives from being categorized as “dangerous  weapons” in Pennsylvania.  AKTI is anticipating the new classification can be finalized by the Pennsylvania General Assembly in the coming weeks.

Andy Armstrong, GM and lead designer for Rosecraft said joining AKTI was an important step for the new company.

“There’s just no better organization in the industry,” Armstrong said.

AKTI’s “Stronger Together” industry event on Friday evening was an opportunity for the wide array of professionals within the knife industry to come together and celebrate.  The evening highlight was the presentation of the AKTI Industry Integrity Award to Les de Asis, founder of Benchmade Knives and one of the founders of the American Knife and Tool Institute.

The Industry Integrity Award recognizes an individual for their contributions to the advancement of the knife industry with undivided integrity, honesty, and dedication. It is an honor voted on by the AKTI Board of Regents.

Les de Asis, who passed away in 2020, began building handmade custom balisongs in the 1980s and eventually started Benchmade Knife Company in 1987. A tireless innovator, Les was inducted into the Blade Cutlery Hall of Fame in 2017. His foresight and dedication helped ensure the sporting knife industry has a unified voice to advocate for knife businesses and users. The AKTI was started by de Asis and CJ Buck of Buck Knives in 1997, and de Asis served as the organization’s first president from 1998 to 2001.

With a successful 2022 Blade Show now in the rearview mirror, plans are already underway for AKTI’s participation at the Blade Show in 2023 on June 2-4, back in Atlanta.  We plan to showcase just how much stronger the knife industry can be with another year of working together. 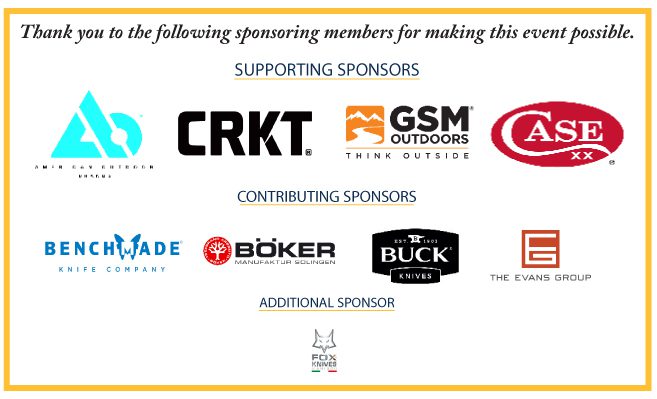