Atlanta, GA – On June 6, 2010, members of the American Knife and Tool Institute met in Atlanta for the group’s Annual Membership Meeting and Legislative Update to learn about the organization’s successful efforts to defend our rights to own and carry knives. Plans for future efforts were also on the agenda. The non-profit organization’s mission is to ensure that Americans will always be able to buy, sell, own, carry and use knives and edged tools. Its goals are to: Educate the public, legislators and law enforcement about knives. Promote reasonable, responsible and consistent knife legislation. Inform with accurate industry, historical and technical information. 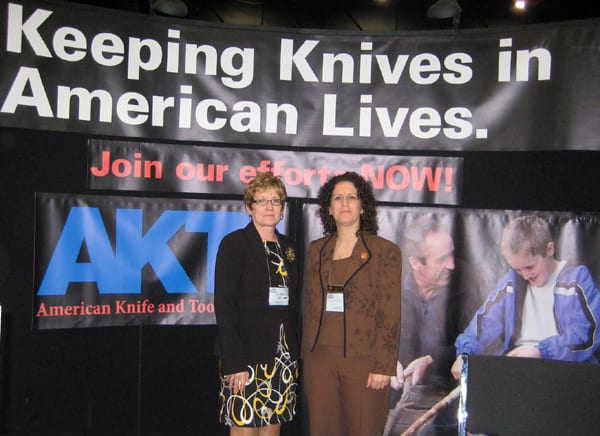 AKTI has been the reasonable and responsible voice of the knife-making and knife-using community since 1998,” said Executive Director Jan Billeb. “As the advocacy voice for the entire knife community, AKTI has a successful, proven record of accomplishments.”

During its annual meeting, members were updated regarding successful legislative initiatives in the last year that limited restrictive knife laws and protect law-abiding citizens. Success stories included Kansas, New Hampshire, and Texas where major changes were achieved. AKTI led the effort to oppose a U.S. Customs’ attempt to define nearly all folding knives as switchblades and make de facto criminals of millions of knife owners. Together with coalition members, they were successful in amending the Federal Switchblade Act with language previously used by AKTI in Texas HB 4456.

AKTI also announced the development of a new website at www.AKTI.org which will provide a central location for information on current state and national knife laws, AKTI initiatives to help re-define knife terminology in current laws and to change old outdated laws related to knife ownership and carry. The site will also add to AKTI’s state of preparedness for the next effort to restrict our right to carry man’s oldest tool.

Is your "dream" knife priced "too good to be true?" It probably is! Counterfeit knives are illegal and have no warranty. They may fail when you need them most. Be Safe, Not Sorry. Buy the real deal.
#BeSafeNotSorry #CarryWithConfidence ... See MoreSee Less

Inferior quality means poor performance Defective knives may not hold the sharpening edge May cause injuries Will not have a valid warranty No way to get resolution to claims or for problems Hurt the....
View on Facebook
·Share

Share on FacebookShare on TwitterShare on Linked InShare by Email