This article appeared in Knife Magazine, May 2022.

The legislative history behind the Federal Switchblade Act of 1958 (FSA) reveals that enforcement issues and uncertainties were foreseen due to the “many exceptions” it provided.  A “huge” problem was pointed out to legislators by the Secretary of Commerce when he read the bill before it was passed.  The Senate Commerce committee sought comments and input from involved stakeholders, including the Commerce and Justice Departments.  The Commerce Secretary’s reading of the proposed bill yielded the following response:

EXEMPTIONS FROM THESE PROHIBITIONS WOULD INCLUDE SUPPLY OR PROCUREMENT OFFICERS AND EMPLOYEES OF THE FEDERAL GOVERNMENT, OF THE MUNICIPAL GOVERNMENT OF THE DISTRICT OF COLUMBIA, OF THE GOVERNMENT OF ANY STATE, TERRITORY, COUNTY, CITY, OR OTHER SUBDIVISION OF A STATE OR TERRITORY; SUPPLY AND PROCUREMENT OFFICERS (BUT NOT THE MEMBERS, IT APPEARS) OF THE NATIONAL GUARD, THE MILITIA OF A STATE, TERRITORY, OR THE DISTRICT OF COLUMBIA, WHEN ANY OF THESE PERSONS ARE ACTING IN CONNECTION WITH THE ACTIVITIES OF SUCH GOVERNMENTS AND ORGANIZATIONS.  THE DEPARTMENT OF COMMERCE DOES NOT RECOMMEND ENACTMENT . . .

AGAIN, WE FEEL THAT THE PROBLEM OF ENFORCEMENT POSED BY THE MANY EXEMPTIONS WOULD BE HUGE UNDER THE PROPOSED LEGISLATION.

(All capitals in original, underlining supplied for emphasis). 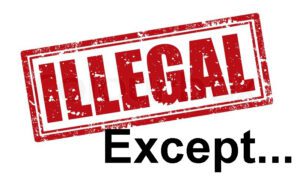 A few weeks after the above report, the Senate passed the bill approved by the House of Representatives earlier that year.  The legislative enactment signed into law by President Eisenhower and generally referred to as the Federal Switchblade Act of 1958 (FSA) is designated within the Federal Record as Public Law 85-623.

“Public Law” is a misnomer since the public very rarely sees it in that form.  85-623 was incorporated into two different “Titles” of the U.S. Code for purposes of application and enforcement, Title 15 pertaining to Commerce and Title 18, which is the Federal Criminal Code.  In other words, 85-523 was dismembered and placed into separate books.  The accompanying illustration shows the “Public Law” version.

The magnitude of the enforcement problem becomes discernible when Public Law 85-623 is reconstituted in the form as it was voted upon and signed into effect.

Such reconstitution of the component sections is appropriate – if not required – to understand the FSA.  Under the principles of statutory construction, it is required that all parts of a single legislative act on a topic are to be construed together when we seek to understand the meaning.

Other principles of statutory interpretation apply, including the rule that every word within a statute is there for a specific purpose and should be given its due significance.

With respect to Public Law 85-623 Section 2, which appears in Title 15 as §1242, is the prohibitory or punitive section.  It provides that it is unlawful to introduce any “switchblade” knife into interstate commerce or manufacture such an introduction into commerce.

Section 3 – §1243 – extends the same prohibitions, and a possession restriction, to specific federal jurisdictions to include outer space and “Indian country.” (It does not figure prominently in this analysis.)

(1)  any common carrier or contract carrier, with respect to any switchblade knife shipped, transported, or delivered for shipment in interstate commerce in the ordinary course of business.

(2) the manufacture, sale, transportation, distribution.  possession, or introduction into interstate commerce, of switchblade knives pursuant to contract with the Armed Forces.

(3) the Armed Forces or any member or employee thereof acting in the performance of his duty; or

(4) the possession, and transportation upon his person, of any switchblade knife with a blade three inches or less in length by any individual who has only one arm.1

Every word is there for a purpose under the rules of statutory construction.  Accordingly, the Act intends those individuals, including active-duty members of the Armed Forces, civilian employees of the Armed Forces, and individuals who have only one arm may acquire “switchblade” knives subject to a blade length limitation with respect to the latter.  Sub-part (1) – the ‘ordinary course of business” exception – is otherwise superfluous.

Moreover, how does a one-armed individual acquire a “switchblade” knife other than by direct purchase from the manufacturer?  Would that individual submit a custom order to a manufacturer of knives?

The above quote from the Secretary of Commerce recognizes another description of “exemptions,” which appears in Section 5 of the Act.  It is §1716 (g) of Title 18.  The full meaning of this section is widely misunderstood when presented without Sections 2 through 4.  It provides

(g) All knives having a blade which opens automatically (1) by hand pressure applied to a button or other device in the handle of the knife, or (2) by operation of inertia, gravity, or both, are nonmailable and shall not be deposited in or carried by the mails or delivered by any officer or employee of the Postal Service.  Such knives may be conveyed in the mails, under such regulations as the Postal Service shall prescribe–

(2) to supply or procurement officers of the National Guard, the Air National Guard, or militia of a State ordering, procuring, or purchasing such knives in connection with the activities of such organizations;

(3) to supply or procurement officers or employees of any State, or any political subdivision of a State or Territory, ordering, procuring, or purchasing such knives in connection with the activities of such government; and

(4) to manufacturers of such knives or bona fide dealers therein in connection with any shipment made pursuant to an order from any person designated in paragraphs (1), (2), and (3).  (Underling supplied for emphasis).

Section 5 of the Act §1716 (g) states that automatic knives may lawfully be “conveyed” by mail to a class of recipients.  It logically and necessarily follows that Sections 2 and 3 (the punitive elements) “shall not apply” to commerce authorized in Section 5.  Importantly, Section 5 does not require that the Postal Service be the exclusive entity for conveyance.  Rather, it uses the word may.  Under established statutory interpretation rules, other shipping alternatives are lawful.  This gives meaning to the “ordinary course of business” exemption mentioned in Section 4.

The Secretary of Commerce specifically invited attention to the ambiguity in the scope of the “militia of a State” exemption with the parenthetical insertion “but not the members it appears.” He was referring to the wording in Sub-part (2) pertaining to the “militia of a State” and the members thereof.  The wording “it appears” politely suggests that the scope of the exemption was unclear to the Secretary and should be clarified.

“Militia” is a word that has become politically and culturally charged.  It figures prominently in the debate about the 2nd Amendment to the U.S Constitution.  State militia laws are not vestiges from the 18th Century.  The Massachusetts unorganized militia “call out” law M.G.L.A. 33 § 55 captioned “Unorganized militia; method of impressing into service” was last amended in 2014.

The militia is almost everybody at some point in their life, and the only daily activity involved is remaining “able-bodied.”

Almost all states have organized and unorganized militia classifications.  The New Jersey designations are representative. N.J.S.A. 38A:1-2 provides:

The militia, except as hereinafter provided, shall consist of all able-bodied citizens of this State and all other able-bodied persons residing in this State who have made a legal declaration of intent to become citizens of the United States, who are at least 17 years of age and, except as hereinafter provided, not more than 45 years of age, and such other persons as may upon their own application be enlisted or commissioned therein in accordance with federal or State law and regulations.

The classes of the militia are:

(a) The organized militia, which consists of the National Guard, the Naval Militia and the State Guard; and

State laws almost invariably provide that all able-bodied individuals within an age bracket are the militia, albeit unorganized.  Section 5 of the Act does not specify a militia classification.  It is unclear how it would apply to the militia of various states.  Militia members historically secured their own individual accouterments.  When did this cease to be lawful?

Section 5 of the Act provides for “bona fide dealers” as a link to the lawful commerce of automatic knives but does not define that term.

Arguably, and consistent with general statutory interpretation rules, a retail merchant regularly engaged in the business of selling knives is a bona fide dealer.  The Act does not specify any standard by which a bona fide dealer is to assess “connection” and “activities” as mentioned in Section 5 and which are extremely indefinite concepts.

Automatic knives may lawfully be manufactured and introduced into commerce if the “militia of a state” or local government employees,  among others, are to be the end-users.  State law, rather than federal, controls the determination of who is an employee of the state or its political subdivisions.  Similarly, state law controls the issue of whether a member of the unorganized militia class may act as his own “supply” officer.  Moreover, a retail merchant will likely be a member of the militia and therefore be eligible to place an order pursuant to Section 5 for automatic knives.  These are novel issues that have never been addressed.  This presents an enforcement issue for federal prosecution.

Research of randomly selected states does not reveal instances where unorganized militia members would be prohibited from exercising the option granted by the FSA.  Application of the statutory interpretation rule of lenity provides that ambiguity is to be resolved in favor of the defendant and against the government.

When we examine Public Law 85-623, it becomes obvious that the 85th Congress enacted a law significantly lacking in clarity.  The Senate Report from the Commerce Committee mentioned at the outset recommended to the Senate that the bill be passed.  The Committee “buried” the recommendations from the U.S. Department of Justice and the Secretary of Commerce against the passage in the last paragraph:

The Justice Department and the Department of Commerce were the entities that would be tasked with the application and enforcement of the FSA.  The legislators who voted to pass the FSA were likely focused on a response to the “switchblade” hysteria roiling the nation at that time.  Was the “huge” enforcement issue mentioned by the Secretary a feature or a bug?  Is the line dividing who and who not may acquire intentionally indistinct?  Did legislators become weary of the hysteria and pass a problematic law so they could move on?  Why did the U.S. Attorney General, the nation’s chief law enforcement officer, expressly not recommend passage?

Other infirmities are present in the FSA, including that it is offensive to the right to keep and bear arms.  AKTI has long advocated for the repeal of the improvident FSA and state law analogs.  We invite all in the knife community to examine these laws and share their views with their elected representatives.  The upcoming mid-term election cycle is an opportune moment to do so.

1 A fifth exemption involving assisted opening knives was added to the FSA in 2009.